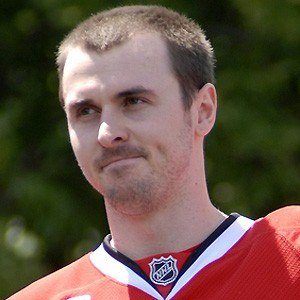 Versatile center who debuted in the NHL for the Chicago Blackhawks in 2006 and won Stanley Cup Championships with the team in 2010 and 2013 before joining the Toronto Maple Leafs after the 2012-13 season.

He played in the Greater Toronto Hockey League from 2000 to 2002 for the Toronto Red Wings.

He scored the goal that clinched Stanley Cup victory for the Blackhawks in 2013.

His parents encouraged him to play hockey as a kid like his older brother.

He played alongside Brandon Bollig on the Chicago Blackhawks' Stanley Cup Championship team in 2013.

Dave Bolland Is A Member Of