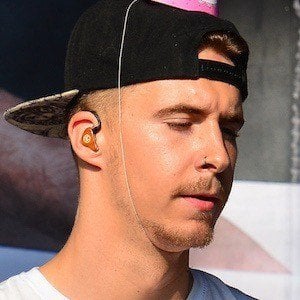 Drummer who rose to fame as the 2012 replacement of Michael Malitzki in the German electronicore band Eskimo Callboy. He went on to win the German version of The Bachelorette in 2017.

He began drumming at the age of eight. Before officially joining Eskimo Callboy, he spent more than six years playing with his deathcore band Beast War Returns.

Eskimo Callboy has supported a variety of popular acts like Her Bright Skies and To the Rats and Wolves on their European tours.

All of his family members played musical instruments and his mother was a piano teacher. He began a relationship with Bachelorette Jessica Paszka after winning the last rose on August 10, 2017.

He is joined in Eskimo Callboy by singers Sebastian Biesler and Kevin Ratjczak.

David Friedrich Is A Member Of