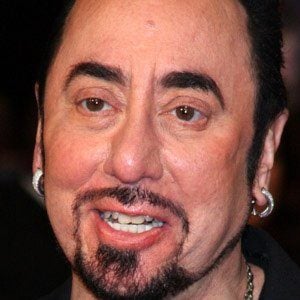 American media personality best known for his relationship with the Jackson family and for his tumultuous marriage to Liza Minnelli. He died of a stroke in 2016. He founded the American Cinema Awards Foundation in 1983.

He had substantial plastic surgery in the 1980s before ever achieving media fame.

He gained reality attention for competing on the sixth season of the UK's I'm a Celebrity... Get Me Out Of Here! He aided Cliff Richard in creating the concept for his album Soulicious, which featured soul singers Roberta Flack and Candi Staton.

He was married to Liza Minnelli from 2002 to 2007. The two had a rocky marriage, which Gest claimed was abusive.

He competed on season 17 of Celebrity Big Brother UK, which was won by Scott Timlin.

David Gest Is A Member Of