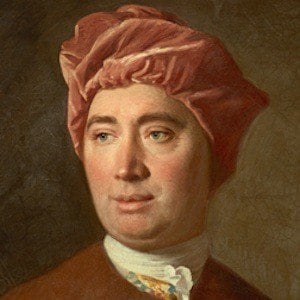 Remembered for his important contributions to Western philosophy, this Scottish Enlightenment figure penned A Treatise of Human Nature (1739); The History of England (1754-1762); Essays, Moral, Political, and Literary (1741); and many other significant philosophical and historical works.

He began his education at the University of Edinburgh when he was only twelve years old and wrote his first published work, a letter titled "A Kind of History of My Life," at the age of twenty-three.

His writings on religion, metaphysics, ethics, economics, politics, aesthetics, and epistemology are often classified as skeptical, empirical, naturalistic, and utilitarian in philosophical genre.

He and his older brother were born in Edinburgh, Scotland, to Joseph Home and Katherine Falconer Home. In 1734, he began spelling his last name, Home, as Hume, to reflect its pronunciation in his native Scotland.

David Hume Is A Member Of