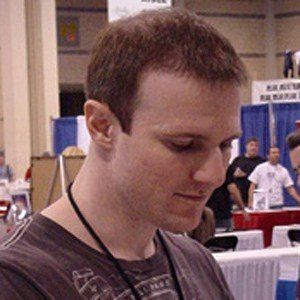 Comic book artist who is known best for the creation of his series Kabuki, and for co-creating the deaf Marvel Comics superhero Echo with Joe Quesada. He was nominated for the 2016 Primetime Emmy Award for Outstanding Main Title Design for Jessica Jones.

He attended Northern Kentucky University for five years where he received four years of scholarship based on his high school portfolio. He graduated in 1995 with a BFA in graphic design.

His work can be seen in Marvel publications like Daredevil, Alias, New Avengers, and White Tiger.

He has a pet cat.

He was pictured beside Jessica Jones star Krysten Ritter.

David W. Mack Is A Member Of