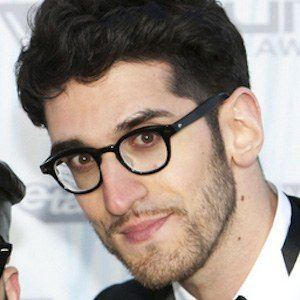 French-Canadian member of the music duo Chromeo, whose 2014 summer hit "Jealous (I Ain't With It)" made it into the top 40 around the world. He is also a professor at Barnard College at Columbia University. He originally moved to New York to get his PhD in English from Columbia University.

He met his music partner Patrick Gemayel in high school, at College Stanislas in Montreal. When they were 15 years old, Gemayel asked him to join his band. They released their first album She's In Control in 2004, while both working in jobs related to the music industry. Their fourth album White Women was released in September 2013, from which hailed "Jealous (I Ain't With It)."

He is hailed in the media for having impeccable style and has had multiple features made about him and his style choices, including Mr. Porter and The New York Times.

He was born and raised in Montreal. He is of Jewish faith and considering Gemayel's Arab heritage, the two joke that they must be "the only successful Arab/Jewish partnership since the dawn of human culture."

His brother is Alain Macklovitch, better known as DJ A-Track of Duck Sauce.

David Macklovitch Is A Member Of