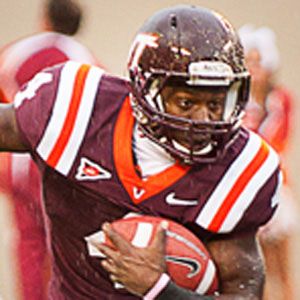 Running back and kick returner who made NFL history with 200 return yards and 100 rushing yards in a single game as a rookie for the New York Giants. He was forced to retire from the NFL in 2014 after suffering multiple serious neck injuries.

He was the ACC Player of the Year his 2011 senior season at Virginia Tech University and he was selected in the first round of the 2012 NFL Draft by the New York Giants.

His 1,533 return yards were enough to qualify for Second-Team All-Pro honors in 2012.

He grew up with an older brother in Danville, Virginia.

He and Trent Richardson were considered two of the top 5 running backs in the 2012 NFL draft.

David Wilson Is A Member Of