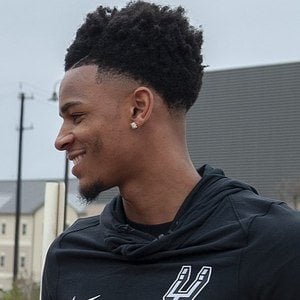 One-and-done guard who was selected 29th overall in the 2016 NBA Draft by the San Antonio Spurs after his lone season at the University of Washington. He averaged 16 points, 4.5 assists, and 6 rebounds and was named second-team All-Pac 12 at Washington.

He attended Rainier Beach High School, where he was named Gatorade Player of the Year for Washington state as a senior.

He was a top 50 ESPN recruit coming out of high school and was also named a Parade All-American.

He grew up in Seattle, Washington. In 2019, he began dating Jania Bania. He previously dated Instagram model Jilly Anais from 2017 up until late 2018. He has a daughter named Riley who was born in 2017. In early 2022, he started dating Jania Meshell.

He played for Lorenzo Romar during his time at Washington.

Dejounte Murray Is A Member Of