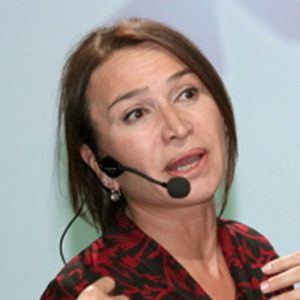 Turkish theater and film actress who is best recognized for being a part of the Gonul Ulku-Gazanfer Ozcan theater company. She is also known for her roles as Necla in the 2014 feature film Winter Sleep and as Siti Ana in the 2001 film Vizontele.

She graduated from the Istanbul University theater department before starting her career as a professional actress at the Gonul Ulku-Gazanfer Ozcan theater. Her television debut came in 1986 when she starred as Zarife in the series Varsayalim Ismail.

She has won several awards for her acting including Best Actress at the Ankara International Film Festival in 2004 for her role in the film Neredesin Firuze.

She was born and raised in Istanbul, Turkey and has a son named Ali.

She starred alongside Yilmaz Erdogan and Cem Yilmaz in the 2001 feature film Vizontele.

Demet Akbag Is A Member Of