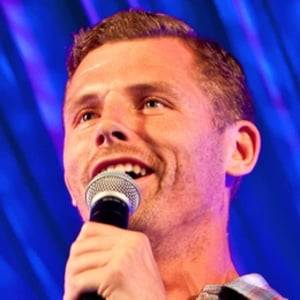 Comedian who rose to fame for his TV show, The Des Bishop Work Experience on RTE Two. He later went on to perform on the critically-acclaimed TV show, Joy in the Hood. He also wrote the memoir, My Dad Was Nearly James Bond, which was inspired by his own father.

He started working as a comedian in Ireland in the late 1990's hosting shows at the International Comedy Cellar.

He was diagnosed with testicular cancer in 2000 and used it as comedy material. He has garnered over 190,000 followers on Twitter where he posts his thoughts and opinions.

He was born in London, England, but brought up in Queens, New York. He moved to Ireland when he was 16.

He worked at the International Comedy Cellar alongside Irish comedian Ardal O'Hanion.

Des Bishop Is A Member Of