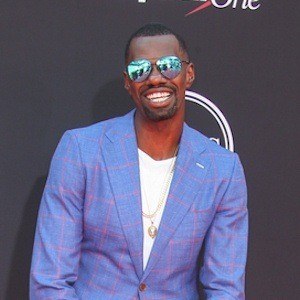 Center who signed with the Golden State Warriors as an undrafted free agent in 2013. After time with the Warriors and 76ers, he found a home with the Orlando Magic in 2014.

After spending a year playing basketball at Antelope Valley College, he transferred to USC where he started 49 games in two seasons. He gave up his final year of college eligibility in order to go pro.

In two years at USC, he had 85 blocks, the ninth-most in school history. Known for his defensive play, he's averaged more rebounds than points per game for most of his college and professional career.

He was born to Thomas Dedmon and Gail Lewis and has two sisters. His father tragically killed himself when Dewayne was a child.

He and fellow Trojan-alum Nikola Vucevic became teammates when Dedmon signed with Orlando.

Dewayne Dedmon Is A Member Of