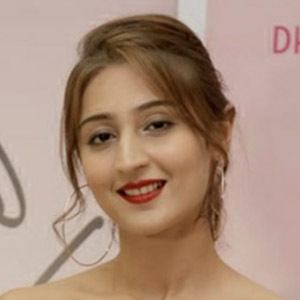 Indian model and singer who is known for having released the popular singles "Shape of You" and "Gulabi Aankhen". She is also known for having performed as a playback singer in the feature films Satyameva Jayate and Veere Di Wedding.

She first started singing at the age of 13. She created a YouTube channel and started recording her singing which eventually led to her appearance on Season 7 of the MTV Unplugged series where she performed "Naina". She then gained attention for performing the song "Ishtehaar" in the movie Welcome to New York.

She was nominated for a Screen Award in 2019 for her performance of the song "Dil Diyan Galla" in the feature film Satyameva Jayate.

She was born and raised in Mumbai and is the daughter of President of Global Marketing and Media Publishing T-Series Vinod Bhanushali.

She collaborated with Punjabi singer Guru Randhawa on the song "Ishaare Tere".

Dhvani Bhanushali Is A Member Of