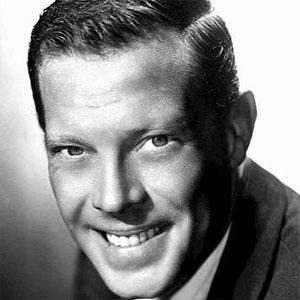 Male vocalist of the 1940s and early 1950s who stirred countless listeners with his classic ballads like "Till the End of Time" and "It Can't Be Wrong."

Registered as a resident alien in the U.S., he avoided military duty and instead went to record a series of popular songs with Benny Goodman and Richard Dorsey.

He gained notoriety for his marriages, including to stars like Rita Hayworth and Joanne Dru.

He was born in Buenos Aires, Argentina. He grew up in a family of British citizens who owned a cattle ranch in the city. After his parents divorced, his mother moved to the U.S.

Moving to Hawaii to pursue Rita Hayworth almost resulted in his deportation back to Argentina, and the accompanying bad press about avoiding the army draft hampered his career.

Dick Haymes Is A Member Of