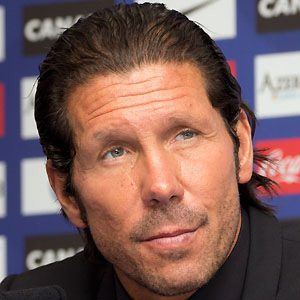 Defensive midfielder who played for such teams as Sevilla, Atletico Madrid, and Internazionale. He was a member of the Argentine national team from 1988 to 2002 and became a manager after retirement, taking over the reigns of Atletico Madrid in 2011.

He began his professional career with Velez Sarsfield in 1987.

He led Atletico Madrid to a UEFA Super Cup victory in 2012.

He was managed by Luis Aragones on Atletico Madrid during the 2003 season.

Diego Simeone Is A Member Of