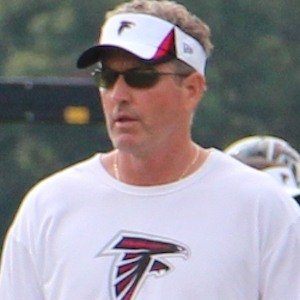 American football coach who replaced Lovie Smith as the head coach of the Tampa Bay Buccaneers after the 2015 season. From 2007-2015, he served as the offensive coordinator for three teams, including the Bucs.

He played college football at Idaho State in the late 1970s and early 1980s. His first head coaching job was at his alma mater, Highland High School, in 1984.

He coached in the Football Bowl Subdivision (then-Division 1-A) from 1998-2006, going a combined 66-44 with Boise State and Arizona State.

His father was a high school football coach. He and his wife Kim got married in 1988 and have two sons and two daughters.

As offensive coordinator in 2015, he helped Jameis Winston throw for more than 4,000 yards, only the third rookie to do so.

Dirk Koetter Is A Member Of