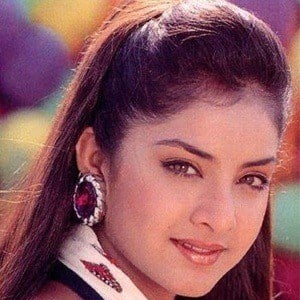 Star of Bollywood and Telugu cinema who had a short but colorful cinema career, breaking the stereotypical roles of Hindi film heroines.

She began her acting career with commonplace romantic leads in Telugu films, and took more challenging roles in Bollywood films, including Shola Aur Shabnam and Deewana.

Her films typically featured female leads who were equal to, if not stronger than, their male counterparts; many of them were box office failures.

She married film producer Sajid Nadiadwala, whom she met at Film City in 1990.

She appeared with Shahrukh Khan in the 1992 Bollywood musical film Deewana.

Divya Bharti Is A Member Of