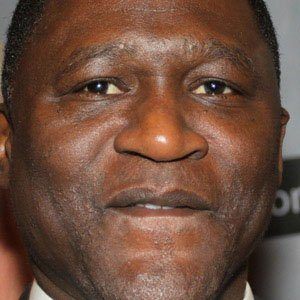 Known as "The Human Highlight Film," he was a 9-time All-Star who led the NBA in scoring in 1986 and spent most of his career with the Atlanta Hawks.

He was the SEC Men's Basketball Player of the Year while at Georgia and entered the NBA after his junior season.

He had legendary battles against Michael Jordan in the NBA Slam Dunk Content, and he came away with two victories.

He divorced Nicole Berry in 2003 and married Robin Campbell Wilkins 3 years later. He has five children, Alysandra, Aiysha, Jacob, Chloe and Danielle, and his nephew Damien played in the NBA from 2004 to 2013.

He and Spud Webb played together on the Hawks, and he was famously defeated in a Slam Dunk Competition by the much shorter Webb.

Dominique Wilkins Is A Member Of