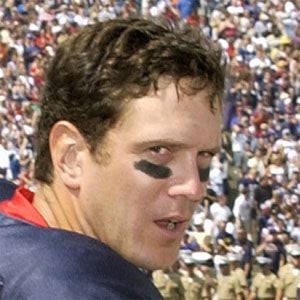 Quarterback who was selected to four Pro Bowls. He spent the first 10 years of his career with the New England Patriots before playing three seasons with the Buffalo Bills and his last two with the Dallas Cowboys.

He was a letterman in football and basketball at Walla Walla High School.

He led the Patriots to the playoffs four times total, however Tom Brady replaced him and turned the team into a Super Bowl Champion.

He had four children with Maura Bledsoe.

He quarterbacked the Dallas Cowboys, but when he struggled he lost the job to Tony Romo and never got it back.

Drew Bledsoe Is A Member Of