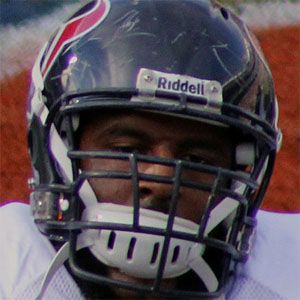 Offensive tackle who was selected to consecutive Pro Bowls for the Houston Texans in 2012 and 2013. He was drafted 26th overall by the team in 2008. In 2017, he was traded to the Seattle Seahawks.

He was twice named the Offensive Lineman of the Year by the Richmond Touchdown Club during his career at Virginia Tech University.

He was statistically named the top left tackle in the entire NFL by Bleacher Report at the end of the 2013 season.

In 2012, he married radio host Devon Anjelica. He has a daughter and two sons.

He protected Matt Schaub during the quarterback's 2009 season.

Duane Brown Is A Member Of