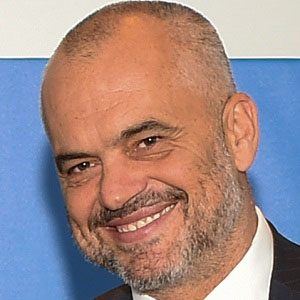 Albanian Socialist Party politician who was elected as the 32nd Prime Minister of Albania in 2013. He previously served as the Mayor of the city of Tirana for over a decade, during which time he spearheaded the Return to Identity Project, which removed many of the city's illegally-constructed buildings.

He was born in Tirana and studied medicine in Himara. He was a standout athlete as a teenager, playing basketball for the Albanian national team.

He is an accomplished painter who has held painting exhibitions in cities like Frankfurt, Berlin and New York City.

He married his second wife, Linda Rama, in 2010. He has children named Gregor and Zaho. His father is famed sculptor Kristaq Rama.

He took over for Sali Berisha as the Prime Minister of Albania.

Edi Rama Is A Member Of