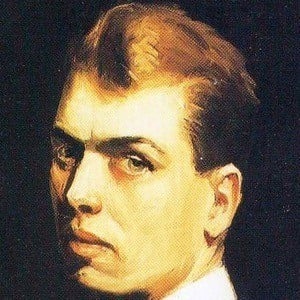 Iconic American realist painter whose best-known works included "Nighthawks" from 1942 and "Automat" from 1927. He was skilled both at watercolor and etching.

He developed, as a young man, a philosophy of life and art that was greatly influenced by the literary work of Ralph Waldo Emerson. His first signed oil painting was 'Rowboat in Rocky Cove' from 1895.

He was famous for his artistic depictions of urban and rural life in America.

His birthplace and boyhood home became known as the Edward Hopper House Art Center and was entered into the National Register of Historic Places in 2000. He married Josephine Nivison Hopper in 1924.

He was influenced by Mark Rothko.

Edward Hopper Is A Member Of