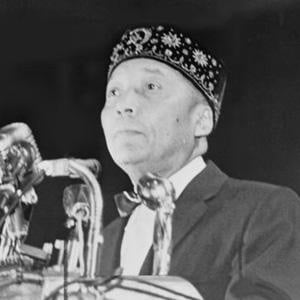 Muslim leader who believed in black nationalism for African Americans. He led the Nation of Islam from 1934 until his death in 1975 and Malcolm X and Louis Farrakhan were students of his.

He ended his education in fourth grade to support his family by working in local factories and businesses.

In 1934, he helped found the Muhammad University of Islam and he was later jailed for it based on challenges by boards of education in Detroit and Chicago.

He married Clara Evans in March 1917, and the couple had eight children together.

Legendary boxer Muhammad Ali was another figure who was greatly influenced by Elijah Muhammad.

Elijah Muhammad Is A Member Of