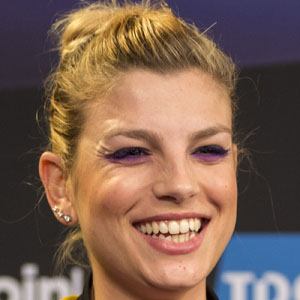 Singer from Italy who rose to fame after winning the TV singing competition "Amici di Maria De Filippi". She has gone on to release Multi-Platinum albums like 2011's "Saro Libera".

She was a warehouse worker before appearing on the reality show "Popstars" in 2003.

She took home the top prize at the Sanremo Music Festival in 2012.

Her parents are originally from the province of Lecce. She was in a relationship with Stefano De Martino from 2009 until 2012.

She and singer Gianni Morandi have both represented Italy in the annual Eurovision Song Contest.

Emma Marrone Is A Member Of