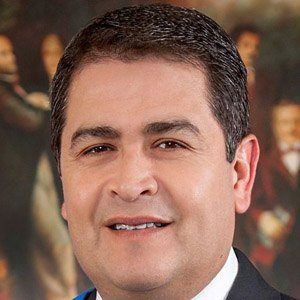 Affiliated with the National Party of Honduras, this conservative politician and business executive was elected President of his country in 2013. From 2010 until 2013, he had served as President of the Honduran National Congress.

He studied law and public administration at both the Universidad Nacional Autonoma de Honduras and the State University of New York.

He worked in the coffee growing, hospitality, and broadcast industries in his native Honduras.

He was born and raised in Gracias, Honduras, in the Roman Catholic faith. He later married Ana Garcia in 1990; they have three daughters and a son.

Juan Orlando Hernández Is A Member Of