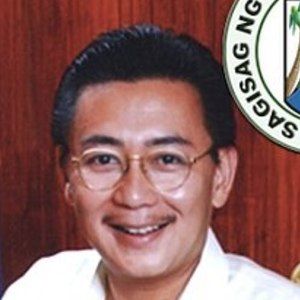 Filipino film actor and politician who was elected Governor of Laguna in 2010.

He attended university at UP Diliman, graduating in 1985 with a degree in Advertising.

His father, George Estregan, also had an acting career, and his uncle, Joseph Estrada, served as President of the Philippines from 1998 to 2001.

He married Maita Sanchez, an actress who also served as Mayor of Pagsanjan, Philippines. The couple became parents to four children between 1987 and 1992.

He portrayed Filipino President Emilio Aguinaldo in a 2012 film.

ER Ejercito Is A Member Of