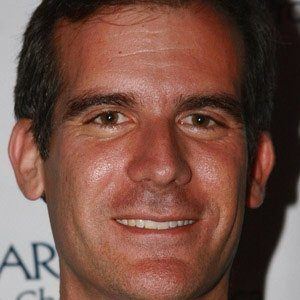 Politician and Democrat who became the Mayor of Los Angeles in 2013. He was the city's first elected Jewish mayor and its youngest in more than a century.

In 1993, he received a Master's degree from the School of International and Public Affairs at Columbia University. He went on to study as a Rhodes Scholar at The Queen's College, Oxford.

Crime fell forty percent in his district after he chose to expand the Los Angeles Police Department and re-implement the Senior Lead Officer Program.

He married Amy Elaine Wakeland in 2009. They adopted a daughter named Maya Juanita; they have also fostered several children.

He endorsed Barack Obama early on in Obama's campaign for the American presidency.

Eric Garcetti Is A Member Of