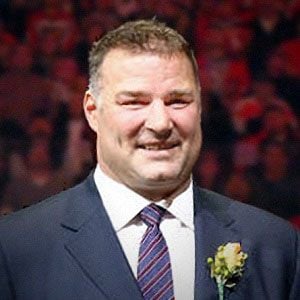 Former NHL All-Star who spent eight years with the Philadelphia Flyers. He was selected first overall in the 1991 NHL Draft by the Quebec Nordiques, and he led the Flyers to the Stanley Cup Finals in 1997, where they were swept by the Detroit Red Wings.

He dominated the Ontario Hockey League, winning the 1990 Robertson Cup and 1990 Memorial Cup. After being drafted by the Nordiques, he refused to play for the team and forced a trade to the Flyers.

He represented Canada in the Olympics three times. He was inducted into the Hockey Hall of Fame in 2016.

He is the oldest son of Carl and Bonnie Lindros. In 2012, he married Kina Lamarche. They have a son named Carl and twins, Sophie and Ryan.

He played alongside Mark Recchi on the Philadelphia Flyers.

Eric Lindros Is A Member Of