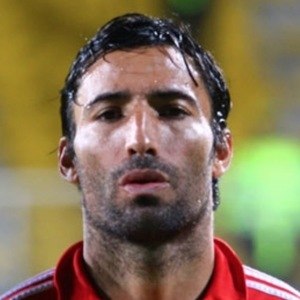 Argentine professional football player who is known for his work as a striker with the America Cali club and the Estudiantes club. He is also known for playing as a forward with the Argentina national team.

He began his youth career with the Argentino football academy. He then went on to make his professional debut in 1997 with the Estudiantes club. He began playing for the Argentina under 20 national team in 1999 and then in 2005 went on to play for their first national team.

He has won several individual honors and awards for his playing including the Argentine Primera Division Top Scorer Apertura in 2003 and the Copa Libertadores Top Scorer award in 2006.

He was born and raised in Trenque Lauquen, Argentina.

Other players known for their work as a striker with Argentina's national team include Paulo Dybala and Javier Saviola.

Ernesto Farias Is A Member Of