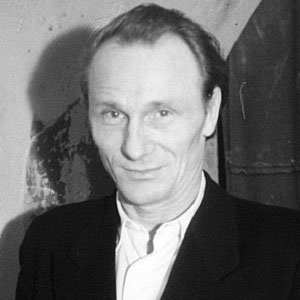 Initially famous for his performances and recordings of politically-themed songs, he went on to appear in the stage and film versions of Bertolt Brecht's play The Threepenny Opera and later starred in a theatrical production of another of Brecht's works, Life of Galileo.

In the early 1930s, the Nazi regime targeted Busch for his communist views, but he was able to escape persecution by fleeing to the Soviet Union. He subsequently joined a volunteer Second Spanish Republic army called the International Brigades and fought in the Spanish Civil War while also recording numerous political songs about the conflict.

In the early 1970s, he received the Lenin Peace Prize.

A native of Kiel, Germany, he lived in the Soviet Union, Spain, and Belgium before returning to East Berlin in the mid 1940s.

He recorded many songs by the Austrian composer Hanns Eisler.

Ernst Busch Is A Member Of