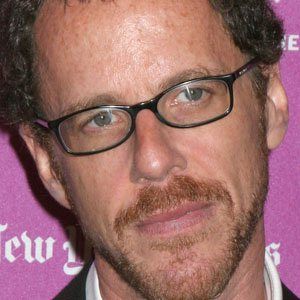 Director, writer and producer who makes up half of the Coen Brothers filmmaking duo with his brother Joel Coen. He and Joel have been nominated for 12 Academy Awards together, with their 2007 feature No Country For Old Men winning the awards for Best Picture, Best Director and Best Adapted Screenplay. Their other celebrated works include Fargo, Raising Arizona, The Big Lebowski and O Brother, Where Art Thou?

He began writing films and making movies with his brother at a young age. The brothers would use their Super 8 camera to remake movies they saw on TV with a friend from their neighborhood as the lead actor.

Though the brothers edit their films together, they frequently list the editor of their films under the alias Roderick Jaynes.

He married film editor Tricia Cooke and he has two children named Dusty and Buster.

He directed Jeff Bridges in the cult classic The Big Lebowski as well as in the 2010 film True Grit.

Ethan Coen Is A Member Of