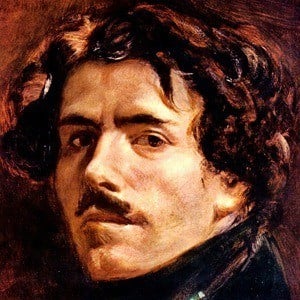 French Romantic artist and lithographer who most famously painted "Liberty Leading the People" in 1830 and influenced the Impressionists.

He began his neoclassical artistic training with Pierre-Narcisse Guerin in 1815. Four years later, he was commissioned to paint his early work "The Virgin of the Harvest" by a local church.

His use of color and brushstrokes influenced the development of French Impressionism, and the thematic content of his work similarly inspired the Symbolist movement.

He grew up as the son of Victoire Oeben and Charles-François Delacroix. However, he was likely the biological child of the renowned French diplomat Charles Maurice de Talleyrand-Périgord, who remained Delacroix's artistic patron throughout his career.

Eugene Delacroix Is A Member Of