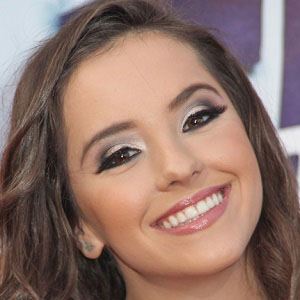 Venezuelan singer and actress known for songs like "Si Existe," "Me Liberé" and "Yo Me Salvé." In 2019, she began starring on the Nickelodeon series Club 57. In 2011, she played Melanie Esquievel in the teen series Grachi.

She was born in Caracas, Venezuela and when she was four, she moved to Miami, Florida.

She appears alongside Sofía Vergara in the 2015 film Hot Pursuit. She was named a co-host of the Kids' Choice Awards México 2020 alongside her husband Camilo.

Her father is singer/songwriter Ricardo Montaner. Her brothers are the famous Latin pop singers Mau y Ricky and she also has two other brothers named Héctor and Alejandro. She got engaged to Camilo in 2018 and they got married in February 2020. She and Camilo are currently expecting their first child together. Their daughter was born in April 2022.

Evaluna Montaner Is A Member Of