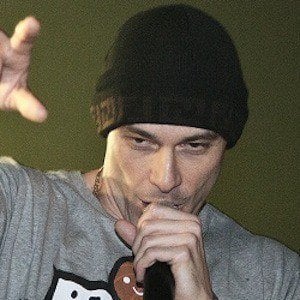 Italian rapper who has found great success in his home with multiplatinum releases like 2006's Tradimento and 2010's Controcultura. He has also performed as a member of the rap duo Rapstar alongside Clementino.

He was born in Senigallia, Italy and got his start in the music business in the mid-90's with the rap group Uomini di Mare.

He dissed rapper Grido from the groiup Gemelli Diversi in the 2006 song "Idee Stupide." Grido later responded with the track Standing Ovation.

He is the older brother of rapper and producer Nesli. He also has a sister named Federica.

He collaborated with singer Gianna Nannini on the 2008 single "In Italia."

Fabri Fibra Is A Member Of