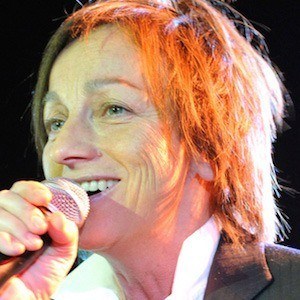 Italian pop singer and songwriter, she is best known for her 1986 hit "Bello e Impossibile." She also achieved European success with her 1984 album Puzzle, which landed in the top ten of Italian, German, Austrian and Swiss album charts.

She learned to play the violin, the piano, and the guitar. She studied philosophy at the University of Siena. After graduating, she joined Greenpeace and was a participant at the protests outside the French Embassy in Rome, when France decided to continue with nuclear experiments. Her first single "America" was released in 1979 and was a moderate hit across Europe.

She wrote and performed the official song of the FIFA World Cup in 1990 and has collaborated with various international artists. She was photographed for the Italian Vanity Fair, when she announced her pregnancy in 2010. The cover showed her showing off her pregnant belly and wearing a shirt reading "God Is A Woman."

She is the older sister of retired Formula One racer Alessandro Nannini. Her daughter Penelope Jane Charlotte was born in November 2010.

She performed in The Threepenny Opera by Bertolt Brecht in Hamburg in 1987, alongside Sting and Jack Bruce.

Gianna Nannini Is A Member Of