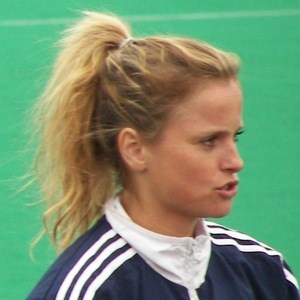 Dutch field hockey striker who has garnered fame for her career with the Dutch national team. She earned a silver medal at the 2004 Olympics before earning her first gold at the 2008 Beijing Olympics.

She debuted for the Dutch senior national team in 1997. She has also earned her master's degree in law in 2006.

She was named the Rotterdam Sportswoman of the Year in 2006. She later became the spokeswoman for Rabobank.

She has been romantically linked to tennis player Raemon Sluiter. Her parents' names are Justiniano and Willy.

She and Dirk Kuyt have been pictured alongside one another on her social media channels.

Fatima Moreira de Melo Is A Member Of