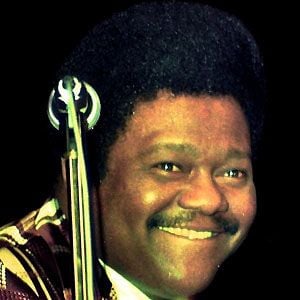 French Creole singer/songwriter best known for such hits as "Blueberry Hill" and "The Girl Can't Help It." He amassed five gold records before 1955.

His first nationwide hit, The Fat Man, was released in 1950 and sold one million copies. He crossed over into pop with Ain't That a Shame from 1955, although Pat Boone's version was the one to reach No. 1.

He and his family were initially thought to have perished in Hurricane Katrina, the 2005 natural disaster that wiped out his hometown of New Orleans. They survived, although most of their possessions were destroyed.

He married Rosemary Hall on August 6, 1948. They had eight children together. His first language was Creole.

He had a cameo in the 1980 movie Any Which Way You Can starring Clint Eastwood.

Fats Domino Is A Member Of