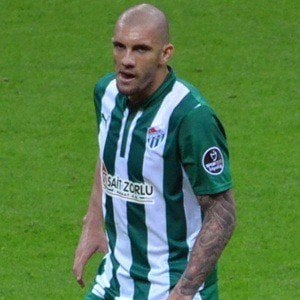 Rose to fame as a striker for the Turkish soccer club Fenerbahçe. He has also played for Atlético Paranaense and Tombense.

He began his professional soccer career in 2006 with the club America-RJ.

In 2015, he was nominated for Milliyet Sports Award for Footballer of the Year.

He was born José Fernando Viana de Santana in Rio de Janeiro, Brazil. His wife, Daiana Santana, has grown quite popular on Instagram.

As a member of the Fenerbahçe soccer club, he played alongside the team's captain Volkan Demirel.

Fernandão Santana Is A Member Of