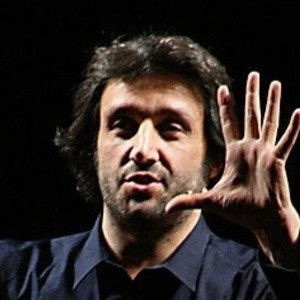 Italian actor and television presenter who is known for hosting the show Affari Tuoi, the Italian version of the gameshow Deal or No Deal. He is also known for his role as the main protagonist in the 2008 film Ho Sposato Uno Sbirro for which he won the Best Actor award at the Rome Fiction Film Festival.

He enrolled at Alessandro Fersen's drama school in 1986 and graduated in 1990. He began acting in theater productions in 1986 and in 1998 he made his feature film debut. His career in television began on the sit-com Club 92 and his career as a presenter began in September of 2006 when he first appeared on Affari Tuoi.

He has won several awards for his acting including the 2001 Prima-Italian Guide to Actors award for his role in the film Guardami and the 2004 Telegrola and Premio per l'Europe award for his part in the television series Don Bosco.

He was born and raised in Rome, Italy.

He starred alongside Cecile Cassel and Claudia Gerini in the 2009 romantic comedy Ex.

Flavio Insinna Is A Member Of