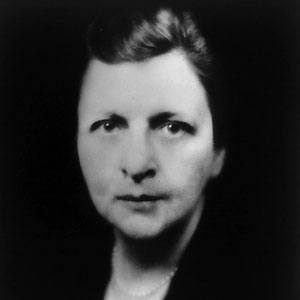 The first female appointed to a U.S. Cabinet position, as President Franklin D. Roosevelt's Secretary of Labor, a post she served from 1933 to 1945. She was one of only two cabinet members to stay in office for the entirety of FDR's tenure as President.

After earning her graduate degree in economics and sociology at Columbia, she served on the committee investigation the horrific Triangle Shirtwaist Factory Fire, which spurred her labor activism.

In her 12 years as FDR's labor secretary, she enacted many of his New Deal policies, including the set up of the social security fund.

She was born in Boston, Massachusetts, moving with her family to Worceseter, where her father founded what is now Butler-Deardon Paper.

Like Jeannette Rankin , in addition to all her political accomplishments, she became a role model for women seeking equality amongst men.

Frances Perkins Is A Member Of