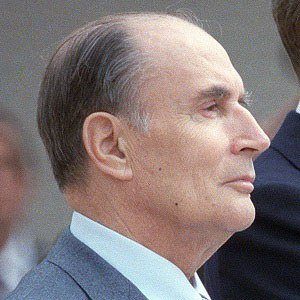 Before becoming President of France in 1981, he held a number of high-ranking governmental positions, including Minister of State, Minister of the Interior and Minister of Justice.

After attending the College Saint-Paul, he graduated from Paris' Ecole Libre des Sciences Politiques. His earliest political appointment (in the late 1940s) was as Minister of Veterans and War Victims.

At different points in his political career, he was affiliated with the Democratic and Socialist Union of the Resistance (UDSR), the Convention of Republican Institutions (CIR) and the French Socialist Party. Throughout the bulk of his presidency, he secretly suffered from prostate cancer. He died of the disease less than a year after completing his fourteen years in office.

He and his seven siblings were raised in a devout Roman Catholic family in Jarnac, France. His marriage to Danielle Gouze Mitterrand resulted in sons named Pascal, Jean-Christophe, and Gilbert; he had two additional children through affairs with Anne Pingeot and Christina Forsne.

He was succeeded in office by Rally for the Republic politician Jacques Chirac.

Francois Mitterrand Is A Member Of