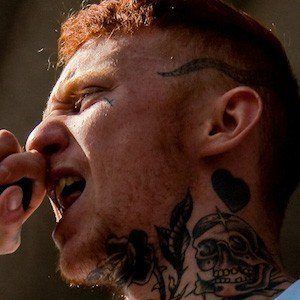 Singer who is known as being the lead vocalist for the bands Gallows, Pure Love, and Frank Carter & The Rattlesnakes. He began his career as a rock singer with Gallows in 2005.

In 2007, Gallows released their first studio album, Orchestra of Wolves. The band signed a 1 million pound deal with Warner Bros Records, only to have it end 18 months later.

He formed Pure Love in July 2011, citing creative differences with Gallows. The band went on hiatus in 2014, and shortly after, he formed Frank Carter & The Rattlesnakes. In 2015, the band released their debut album Blossom, which peaked at #18 on the UK Albums charts.

He was born and raised within England.

He was replaced as the lead singer of Gallows by Wade MacNeil.

Frank Carter Is A Member Of