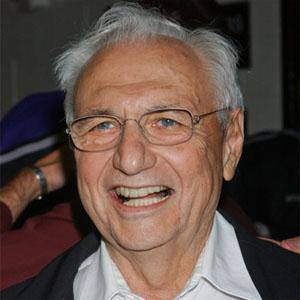 Deconstructionist, Pritzker Prize-winning architect famous for building many amazing structures that became tourist attractions. He was called "the most important architect of our age" by Vanity Fair in 2010.

He tried truck driving, radio announcing, and chemical engineering before settling on architecture. He studied city planning at the Harvard Graduate School of Design, but left out of disgust with what he felt was the program's socially irresponsible approach to architecture.

His parents were Irwin and Thelma Goldberg, both Polish Jews. His first wife, Anita, convinced him to change his last name from Goldberg to Gehry to avoid anti-semitism. He married his second wife, Berta Isabel Aguilera, in 1975. He has two sons named Alejandro and Samuel and two daughters named Brina and Leslie.

He and his contemporary Thom Mayne are often associated with the Los Angeles School of architecture.

Frank Gehry Is A Member Of