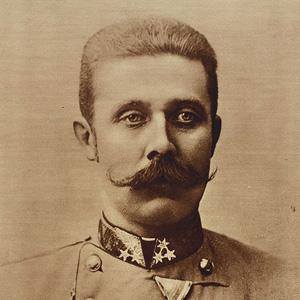 Archduke of Austria whose assassination in 1914 by Serbian nationalists sparked the First World War. He was an avid trophy hunter, and records from his lifetime indicate that he had an estimated 300,000 game kills.

His cousin committed suicide and his father died of typhoid fever. This put him next in line for the Austrian throne.

After the assassin shot him and his wife, his final words to her were, 'Don't die darling, live for our children.'

His parents were Archduke Karl Ludwig of Austria and Princess Maria Annunciata of Bourbon-Two Sicilies. He had four children with Countess Sophie Chotek.

Winston Churchill was a high-ranking member of the British government in WW I, which took place as a result of his assassination.

Franz Ferdinand Is A Member Of