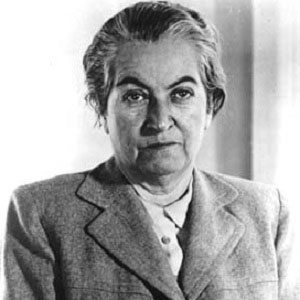 Born Lucila Godoy Alcayaga and better known by her pen name of Gabriela Mistral, this Chilean poet was the 1945 recipient of the Nobel Prize in Literature. She also received the 1951 Chilean National Prize for Literature, and her Sonetos de la Muerte poetry collection won the 1914 Juegos Florales literary contest.

Her earliest poems, many of which were published in the Chilean newspaper El Coquimbo, include "Junto al Mar," "Carta Intima," and "Ensonaciones."

Her poetry was greatly influenced and deepened by the 1909 suicide of her friend Romelio Ureta.

The daughter of teacher Juan Geronimo Godoy Villanueva and seamstress Petronila Alcayaga, she was born in Vicuna, Chile, and raised in Montegrande. Her elder sister, Emelina Molina, was her first teacher.

She and fellow 20th-century Chilean poet Pablo Neruda both received the Nobel Prize for their literary work.

Gabriela Mistral Is A Member Of