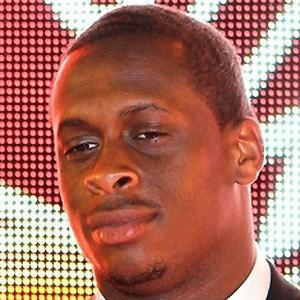 Former West Virginia University quarterback who was selected by the New York Jets in the 2nd round of the 2013 NFL Draft. He became the Jets starter in the preseason of his rookie year.

He completed an astounding 71.2 percent of his passes during his 2012 season with West Virginia while throwing 42 touchdowns and only six interceptions.

He won an oratorical contest in fifth grade for reciting Langston Hughes poems. Although his NFL career has been marked by struggles, he recorded a perfect passer rating (158.3) in the last game of the 2014 season.

He grew up in Florida with his younger brother, Geonte.

As a junior at West Virginia, he threw for 401 yards in the Orange Bowl, breaking Tom Brady's 11-year-old record of 396.

Geno Smith Is A Member Of