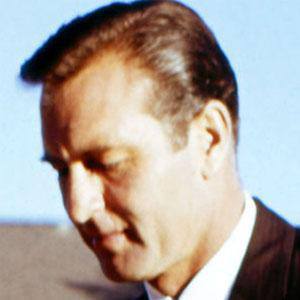 He appeared in many Westerns, including 1942's Orchestra Wives and 1947's The Brasher Doubloon. His other films include 1980's Blood, Money and Tears and 1965's Battle of the Bulge.

After two days in Hollywood he found his first job as a stuntman for a Greta Garbo film.

Although he never appeared as the main hero of a Western film, he had a lot of supporting roles.

He married Dinah Shore in 1943 and the couple raised a biological daughter and an adopted son together.

He taught himself bronze sculpting and made busts of John Wayne and Ronald Reagan.

George Montgomery Is A Member Of