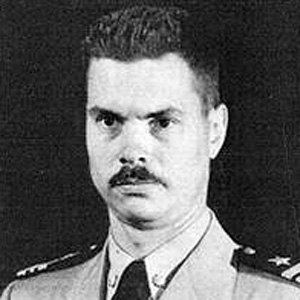 Founder of the American Nazi party who was its Commander from 1958 to 1967. He controversially believed that all blacks should be deported and all Jews should be sterilized.

He formed the American Nazi Party, which was originally called the World Union of Free Enterprise and National Socialists, in 1959, and was a frequent demonstrator at civil rights rallies.

Because he was a member of the U.S. Navy, he was eligible for burial at Arlington after he was killed, but the Pentagon did not let him because his followers refused to take off their swastika armbands.

His father Doc Rockwell was a popular vaudeville comedian.

He demonstrated in front of Dwight Eisenhower's White House and frequently led counter-rallies to those of Martin Luther King.

George Lincoln Rockwell Is A Member Of