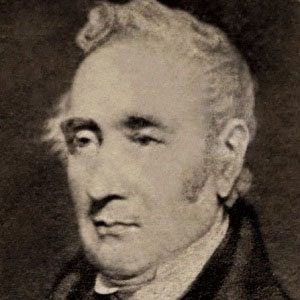 Famous for constructing the Liverpool and Manchester Railway, which was the first public, steam-operated, urban rail system in history, this British engineer is also remembered for his development of the world's standard 4'8.5" railway track gauge.

In his late teens, he learned to read by taking night school classes and worked by day as a railroad engineer.

In the early 21st century, England's George Stephenson College was dedicated in his honor. He was known as the "Father of Railways."

The son of illiterate parents Mabel and Robert Stephenson, he spent his youth in Wylam, Northumberland, England. Following their 1802 marriage, he and his wife, Frances Henderson, welcomed a son named Robert. Over a decade after his first wife died of tuberculosis, he married Betty Hindmarsh.

In the second decade of the nineteenth century, Stephenson and Humphry Davy both invented safety lamps for use in mines.

George Stephenson Is A Member Of