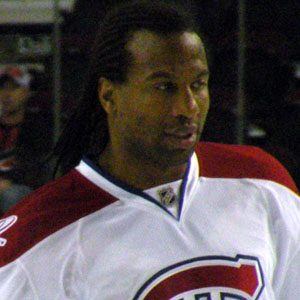 Forward who played for the Edmonton Oilers, Phoenix Coyotes, Pittsburgh Penguins, and Montreal Canadians from 1997 to 2010.

He began his junior hockey career in the Quebec Major Junior Hockey League in 1993.

After retiring he took up a career in politics, and was a deputy leader for Canada's Green Party from 2010 to 2013.

Because of his role as an enforcer, he was signed by the Pittsburgh Penguins in 2007 to help protect young star Sidney Crosby.

Georges Laraque Is A Member Of