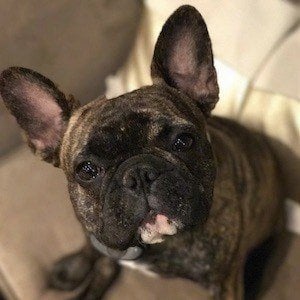 Rose to fame in 2016 when she became one of the fur babies of the Bratayley clan. The French bulldog has become incredibly popular on the bratayley Instagram account, which has more than 700,000 followers.

One of her earliest appearances on YouTube was in the January 2016 video "Naming the New Puppy!" The video earned more than 1 million views after it was posted.

She has starred in numerous Bratayley YouTube videos like "GG the Stunt Dog" and "Easter Bunny GG."

She is owned by the Bratayley family: this includes parents Billy and Katie LeBlanc and their two daughters, Hayley and Jules.

She is one of three dogs owned by the LeBlancs. Her fellow fur family includes Winnie and Piper.

GG LeBlanc Is A Member Of